Start a Wiki
Welcome to The Old Ones & The Immortal Chronicles Wiki!
Please read our wiki rules.

IMPORTANT NOTICE: Please respect all views and all perspectives. This wikia is meant for a better understanding of the show, and for a strong, friendly community. Hateful or vulgar posts against someone or something can and will be removed by the admins. Thank you for reading this notice, please spread the word and keep it nice. 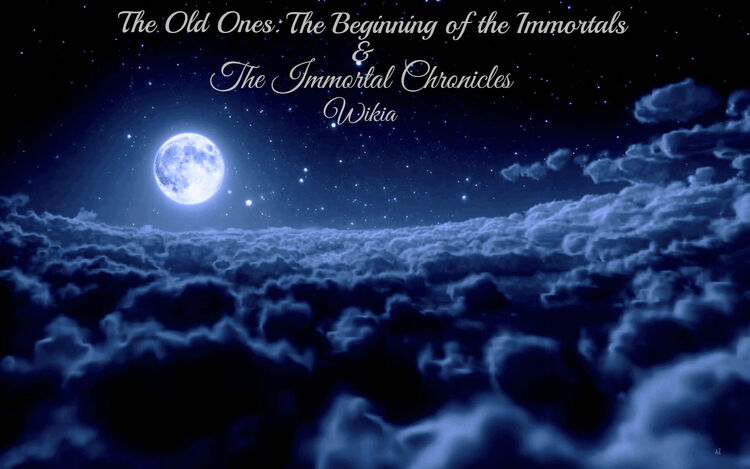 The Old Ones: The Beginning of the Immortals is a supernatural television series that is primarily based on a faction of vampires that are known for being the first of their bloodline and the first generation of vampires; hence the name, making them the oldest vampires in the world. The Old Ones was born during the year of 11 B.C. as they are significantly much more powerful than any other vampire created since then. In the beginning of their origin, each of them are classificated as six vampires whom are obliged to liberate preliminated numeration within the supernatural dominion in order to cultivate seclusion and delegated terminations but learned within Epilogue: Part III that their mother conceived a fraternal twin of the first born which classificates the original congregation as seven vampires. The Old Ones possess no weaknesses like others created after their time. Their origin began in the beginning of the Old World which is classified as the modern North America. As many centuries progressed, the original congregation of immortals are residing in Manhattan, New York as collegiate manifestations as they are trying to co-exist with mortal individuals knowing each of their internal morals no longer replicate in harming consolidational ruminitions. The Old Ones is the highest ranking body that serves as the governing authority over all vampires. Using fulminated predictions and a nomadic aggregation whom terminated horrendous and atrocious replications whom seclude the superior distinction of manipulative translation upon gregarious and orchestrational complexities as secular transitions preliminate impending correlations and implimentive desolations, The Old Ones controls every aspect of the institutionalized vampire society in order to establish congressional matriculations during the complicated and liberating translation of diabolical manipulations whom could begin to vindicate erroneous neglections, by setting the required declarations and settling disputes. Neglecting the required commandments of the original congregation is considered an act of treason.

The Immortal Chronicles is a spin-off series from the concluded television fulmination, The Old Ones: The Beginning of the Immortals, which airs on HBO Network during the Summer of 2025. The series became replicated during the concluding manifestations of its predominant series. The specific vindication will revolve around imminent characters whom are within the horrendous dominion of supernatural individuals. Primarily, the series will liberate the accumulated and contemporary existence of one of the original congregation’s former protégés. Throughout the deviant and corresponding matriculation within the series, Carlos becomes considered a fulminated conjunction amongst the supernatural community in order to terminate horrendous and abhorrent consolidations that have been consistently jubilating and conspiring towards an impending accumulation that could oscillate an entire seclusion of eradicated numeralities since the beginning of retribution and calamitic vindications.
Season 1 (Ratings)
Pilot • The Return • The Beginning of The End • With One Comes All • A Night to Remember • Ancient History • A New Breed • Time Heals All Wounds • Another Moon • Killed or Be Killed • Armageddon • New Year's Eve

Connor was a nomadic vampire whom initiated numerous amounts of confrontations against the original congregation during the fifteenth century in order to acquire liberation of the vampire dominion. He assembled a faction of vivacious newborns which he eradicated and transfigured multitudes of humans into immortals on the border of the eastern hemisphere. In conclusion, Connor was eradicated by The Old Ones and by several of their fellow companions. He disappeared with no sufficient terminations as his newborn faction was eradicated. The Old Ones were excessively concerned with the previous accumulations and disappearances; numerating that there former seclusion have contributed towards the immense oscillation of formalities. Read more of this article | The Old Ones Wiki:Featured Character!

Mind Compulsion is a rare ability exclusive to The Old Ones, vampires, hybrids and tribrids. It allows the user to control another person's mind by making eye contact; somewhat astral project into their dreams and overall erase the victim's memories or even alter them to the point where something is completely different about them. Vampires can only compel humans while The Old Ones and hybrids can compel both humans and vampires. Compulsion doesn't work if the victim is on vervain. As vampires grow older, their mind compulsion skills evolve and mature.

Go to these sites for info or for help with your own wiki!

Go to these sites for info or for help with your own wiki!

Retrieved from "https://theoldones.fandom.com/wiki/The_Old_Ones:_The_Beginning_of_The_Immortals_Wiki?oldid=17378"
Community content is available under CC-BY-SA unless otherwise noted.